Diving is the long-term stay under water, usually with aids such as a breathing air bottle, see SCUBA (short for Self Contained Underwater Breathing Apparatus).

Until the middle of the twentieth century, diving was mainly professional, but nowadays it is also a growing pastime. Diving without breathing air is what we call free diving. We speak of technical diving when there is no possibility to rise directly to the surface, such as with a decompression obligation (compulsory decompression stops during take-off to prevent decompression sickness) and diving in caves or wrecks. 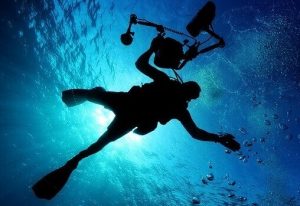 When diving deeper than 40 meters on compressed air, also known as Deep Air, there are a number of disadvantages. The biggest disadvantage is that the zero time (the time that can be kept down without decompression) drastically decreases and the narcotic effect increases due to the proportion of nitrogen in the air, nitrogen narcosis. Because of the anesthetic it is harder to make the right decisions. This phenomenon is sometimes referred to as deep rousing in English: Rapture of the deep, because the symptoms are similar to those of excess alcohol and can make divers reckless with serious, usually fatal, consequences. To prevent this, diving with mixtures of gases is carried out and the nitrogen is partially (trimix, hydreliox) or completely (heliox) replaced by a gas such as helium. Helium has a much less narcotic effect than nitrogen.

A major disadvantage of helium is that it has a very low insulating value, as a result of which it cannot be used as a dry packing gas. As dry pack gas, argon is usually used, which has a strong insulating value, but which also means that an extra bottle with this gas must be added to the configuration.

With the increase in depth, the problem of too much oxygen content also arises (oxygen poisoning). The narcotic effect of CO2 can also become dangerous at great depths. These are factors that must be taken into account when using mixed gases.

Due to the higher ambient pressure at depth, gas consumption will be much higher. Many divers who make deep dives therefore dive with a double set and “stage tanks”.

Decompression stops can be encountered during the ascent, because the deeper you dive, you can stay shorter and shorter at that depth, without stopping a compulsory time at different depths, before going to the surface. You also have to take into account the amount of gas that is used during the dive or that might be needed in case of (technical) problems.

The above problems can be circumvented by the use of liquid respiration [1], whereby a flexible diving suit can continue to be used. The fluid in the lungs allows the pressure in the diver’s lungs to adjust to the surrounding water pressure without the use of high-pressure gas. With liquid respiration, there is no saturation of the body tissue with high pressure nitrogen or helium, which is used when using gas, and therefore no decompression is required. However, a problem is the high viscosity and the associated removal of CO2.

While diving, the diver breathes breathing air from a cylinder (compressed air). During the dive, the diver breathes air at a pressure equal to the water pressure of the depth at which he is. The deeper he goes, the higher the pressure at which he breathes. Air consists largely of oxygen and nitrogen. In the lungs, the gases in the breathing air partially dissolve in the blood. This is done in an equilibrium reaction, whereby the higher the pressure, the more gases dissolve. The body uses the oxygen for combustion, but leaves the nitrogen undisturbed: it remains dissolved in the body fluid. Over time, the nitrogen concentration in the body fluid will become so high that the solution becomes saturated. If the diver stays at that depth, he will no longer absorb nitrogen in his body fluids. The relationship between gas solubility and pressure is described by Henry’s Law.

When the diver leaves the depth and therefore the pressure on his body becomes lower, the solubility of nitrogen in his body fluid will decrease. When this reaches the point where the solution becomes oversaturated, the nitrogen must diverge from the solution as a gas. With a slow decrease in pressure this can be drained too much through the lungs, but if the pressure decreases faster, then this gas will form bubbles in the body fluid and those bubbles damage nerves and the functioning of the body. This phenomenon is called decompression sickness. This process can be compared to a bottle of soda: as soon as the cap is removed and the excess pressure in the bottle drops, the soda starts to fizz.

It is the ratio between the depth, the duration of the dive, whether the diver is young or old and the level of health of the diver that determines how quickly that saturation occurs. That is why tables have been developed that indicate a safe average of how long the diver can dive at a certain depth and can return. This is called zero-time diving.

During zero time diving, the diver can always come to the surface at the right speed. For a no-time dive it is always recommended to make a so-called ‘safety stop’; the diver then stays at a certain depth for a certain time as with a decompression stop, giving the body the chance to release any excess nitrogen. If this is not possible for any reason, the diver can simply go upstairs.

A higher oxygen content in the breathing gas during the decompression stops is an aid to make these dives safer. To properly plan and calculate these dives, a course must be done. With very deep dives the gas consumption is so great (due to the increasing pressure the breathing gas is compressed proportionally) that one uses about once every 10 meters that you dive deeper than once over water. The amount of compressed gas can become so large that the use of a rebreather or larger / multiple diving bottles becomes necessary.

Deep diving and long diving will usually only be done by a recreational diver if he has been trained for this and because there is something to be seen there that is worth the effort outlined.

Cave diving is diving that takes place in a cave with water. Caves can have lengths from a few meters to kilometers. The further one swims into a cave, the more difficult the dive becomes because the dive requires adapted equipment and a large amount of breathing gas; you have to take into account that you cannot go to the surface during the trip. The starting point is always to keep a permanent line connection with the entrance to prevent getting lost. Cave diving requires a very thorough training. The 2/3 rule ensures that there is enough air left for the way back
Wreck diving

For wreck diving, the goal is to view a shipwreck. An example of this is Hilma Hooker who is off the coast of Bonaire. In addition to the usual diving knowledge, specific knowledge is also discussed: in wrecks, it is often impossible to take off quickly in an emergency. There is also often poor visibility (due to swirling dust) and sharp (metal) protrusions or hanging wires and pipes. This makes it very dangerous to view wrecks without special training. A wreck is often not accidentally sunk in that place, so that most wrecks are in places that entail extra risk.

When diving ice, people go under the ice, a permanent line connection with the bite is needed to get back to the surface safely. A direct ascent to the surface is not possible and therefore one speaks of a technical dive.

For ice diving, adapted techniques are needed to properly perform the dive. There are some organizations, including the British Sub-Aqua, Professional Association of Diving Instructors (PADI), Instructor Dive Development (IDD) en International Association of Nitrox and Technical Divers (IANTD) giving courses in ice diving. Every organization has its own methods, whereby the basis is the same, namely that there is always a fixed line connection with the bite. This makes it always possible to return to the surface.

The biggest differences are in the freedom that the diver (s) have under the ice. A number of organizations instruct ice diving among other things by means of a signal line with a signal master on the surface, whereby communication between divers and the signal master takes place via jerking via the signal line. This form of ice diving is also known to the IANTD, but this organization goes further than that and also teaches the divers to dive independently without direct contact with the signal master (in this case more guard) or surface under the ice, by means of line techniques. as they are used in cave diving.

Another form of ice diving is diving through a course line that connects a number of bites. In that case, no signal master is used, this form is often used by students or beginning ice divers.